Over the course of its second fifty years, the Teachers Federation remained explicitly aware of its dual roles, industrial and professional, and the interconnection of the two when applied to education and educators. Also remaining important was its role in what the 1968 celebrations called “community activities” and later decades would stress as “social justice”. The Federation fought on many fronts to champion public schools and other public institutions in the face of neoliberal privatisations and a market mentality. Continual political intervention into educational policy and practice has angered teachers, as has the issue of federal funding and its distribution which remains a fraught issue.

In 1971, the Federation had a membership of 35,000, almost 100 per cent of the teaching profession. This would drop to 75-80 per cent after 1972 when the Department of Education ceased its deduction of Federation dues from teacher’s pay cheques. In 1985, with 64,521 members, it was the largest industrial union in New South Wales.

In the aftermath of the 1968 strike, the Federation faced a hostile state government and state agencies, determined to use all the powers available to them to curb Federation demands. This extended to an attempt by the Public Service Board to deregister the Federation through 1972 and 1973, but this was dismissed by the Arbitration Commission in November 1973. In 1970, strike action was taken against a direction by the Minister to all secondary teachers to teach an extra period in the context of continuing teacher shortages. On 27 November 1973 (after the Arbitration Commission dismissed the Board’s application for deregistration) the Federation held the first state wide strike exclusively on salaries.

Many Federation members were involved in the Moratorium movement against the Vietnam War, Australian participation in it, and Australian conscription in the late 1960s and early 1970s. The Federation itself did not adopt opposition as an official policy and indeed the whole issue was controversial within the Federation, evidenced at the annual conferences, and in the pages of Education. However, some Federation members organised a Teachers Vietnam Moratorium Committee in 1969 and teachers and students were an obvious vocal and active component of the rallies and marches of the following few years. O’Brien (1987, p. 158) believed that the Committee, as well as mobilising teachers on the war and conscription, assisted in legitimising the tactics of direct action “that would have been quite unthinkable within the union before that time”.

In 1969, Federation had adopted the slogan “Government schools first” to define its position in the continuing debate over federal and state funding for non-government schools. In the early 1970s, this became a “needs” based policy. Both were strategies to counter the argument that there was a crisis in all schools and that all needed funding.

One significant dispute played out in 1976 in the Illawarra region south of Sydney. At Warilla High School, teachers stopped work over the lack of adequate staff to meet the needs of its socio-economically disadvantaged community. Eventually supported by other unions across the Illawarra, and teachers from schools across the state, the local teachers remained on strike for 28 days. This dispute gained acceptance for the principle of differential and improved staffing for children in disadvantaged schools and communities.

Also significant were the long drawn out 1983 picket line protests which defeated the government proposal to sell the former Dover Heights Boys High school in the eastern suburbs to a private school. The former school became a TAFE (Technical and Further Education) college for some time, but ultimately, in 2003, it passed to a private college.

While the Federation has never affiliated with the Australian Labor Party, in 1983 it endorsed the policy of the federal Labor Party during the election campaign and urged teachers to vote accordingly. Focussing primarily on educational issues, there was also support for the “No Dams” platform which would see the reversal of decisions to dam the Gordon and Franklin wild rivers in Tasmania (Education, February 1983).

A new Liberal National state government came to power in 1988 under Premier Nick Greiner. In the following years, the Federation faced strong challenges from a radical conservative educational policy that would apply market theory and market forces to the provision of education. Particularly repugnant to the Federation was Education Minister Terry Metherell. A “Day of Action”, 17 August 1988, saw teachers, parent bodies, and community organisations rally in Sydney’s Domain to protest against Metherell and the government’s extensive cuts to staffing and special programs along with the proposed changes to curriculum. According to Federation member and historian Denis Fitzgerald (2011, p. 89), the “Day of Action” rally was “massive, unprecedented and uncountable”. It enjoyed positive media coverage in a community increasingly concerned about the government’s policy.

In the 1990s, the Federation fought to restore the cutbacks in staffing that had occurred in the late 1980s. While they achieved some progress, huge problems remained, even after Metherell was replaced in 1990 and a change of government to Labor occurred in 1995. Fitzgerald, Federation President 1995-1997, detailed the difficulties faced in the 1990s. Salaries campaigns were bitter and prolonged, taking place under the award restructuring principal that any salary rise had to be funded by trade-offs. For education, trade-offs meant a worsening of teaching and learning conditions in schools and colleges. The TAFE system was particularly undermined by restructure and a turn to private colleges, a situation that continues to play out in the twenty-first century. Commonwealth funding to the states under the Howard government appeared to the Federation to be wholly in the interests of children in private schools. Increased testing and comparisons between schools became a central component of school life. The Federation could not hold back this wave of testing which had gained bipartisan and populist support. It sought to protect children by lobbying against the publication of test results in a form that would rank and compare individuals and school communities. The testing, ranking, comparison, and the publication of such results remain important issues for the Federation.

In a related issue in the early 2000s, Federation rejected the Commonwealth Government’s reporting system which required all public school students across the nation, from Kindergarten to year 12, to be graded from A to E in each subject. In New South Wales, the Federation issued a ban on such reporting, defying the Department of Education, and gaining victory on this matter in the Industrial Relations Commission in 2006.

In 2001 the Federation co-sponsored an Inquiry into the Provision of Public Education in New South Wales chaired by Dr Tony Vinson. The Vinson Report received wide media coverage, and strong public endorsement. It influenced subsequent cuts to class sizes in public school Kindergarten to Year 2 classes and made recommendations for a needs-based schools funding formula. These recommendations in turn influenced the Federal Labor Government to commission the Gonski Review in 2010. However, the full Gonski funding recommendations were not implemented. The Federation, in association with other teacher and parent groups across the nation, campaigned for “Fair Funding Now!” 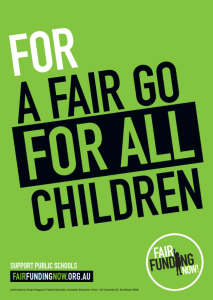 The Federation supported other unions and community groups in a “National Day of Action” in 2006, part of the Your Rights at Work campaign against the Commonwealth Howard Government’s WorkChoices legislation. This legislation undermined the trade union movement generally, and all it had fought for and achieved. The campaign was significant in the Australian Labor Party winning the election of 2007 and the repeal of the legislation in 2009.

From 1999, Teachers Federation House has been located at 23-33 Mary Street in Surrey Hills in refurbished industrial buildings. Membership numbers have stabilised at about 67,000, a smaller percentage of teachers and other state educational workers than in past periods due perhaps to general industrial conditions in the twenty-first century. Yet it remains a strong and influential union. After some years of running a parallel branch of the national teachers union, the Federation is now a full branch of the Australian Education Union which represents government school and TAFE teachers and other workers nationally.

In September and October 2018, the Federation celebrated 100 years with a special exhibition, “Unity! Strength! Justice!”, open to the public for four weeks at Federation House in Surry Hills. One report of the Centenary stressed the Federation’s “long proud history of social justice”, along with the improvements in teachers’ wages and working conditions and the improvements for students achieved over the years (“One hundred years of unionism”, 2018). Highlights of the exhibition were the achievements in the areas of women’s rights and Aboriginal rights. Federation’s journal stated that campaigns supported by Federation over the years and into the future were underpinned by the values public schools embrace: “acceptance of all regardless of race, gender, sexual orientation, faith, or economic status; the celebration of diversity to create and maintain a harmonious environment; and resolving conflict peacefully” (Education, Centenary special edition, 7, 2018). The Federation’s industrial and professional roles combine with a strong commitment to social justice within its continuing campaigns which include: “Fair funding Now!”, TAFE education, “Teachers Make a Difference”, the rights of Aboriginal students and their communities, and ongoing support for Stewart House (NSW Teachers Federation website). 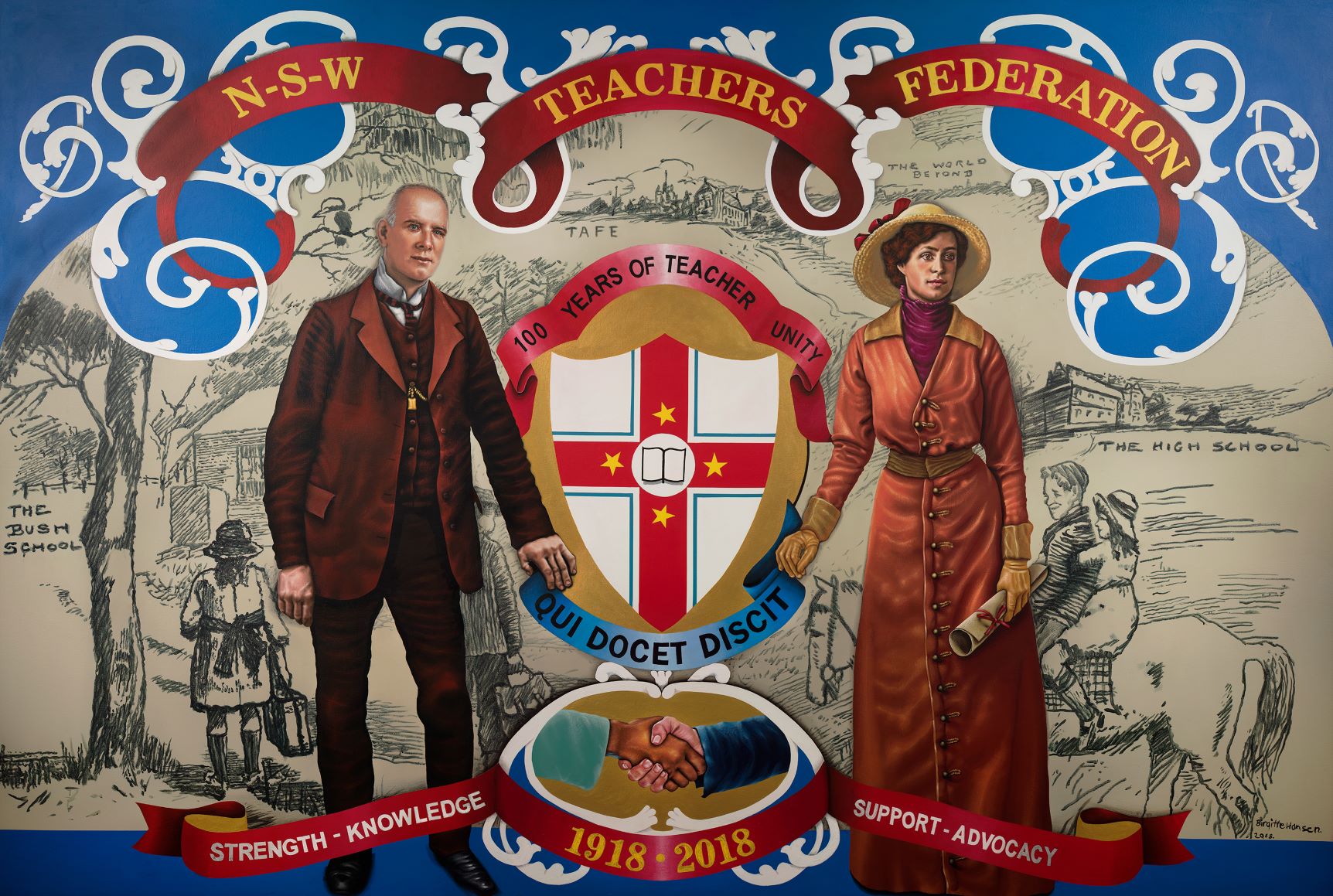