This book was co-written by R. W. Connell (Bob/Robert/Raewyn), D. J. Ashenden (Dean), S. Kessler (Sandra) and G. W. Dowsett (Gary). It was almost certainly the most influential social study of schooling that was written in Australia in the second half of the twentieth century. It had an impact on educational policy, the sociology of education, teacher education, teacher union policy and teachers. There was likely a fair readership outside these groups as well. The impact was assisted by the participation of its authors in numerous seminars, conferences and media interviews that followed publication.

Making the difference and several other related publications arose from a ‘School, Home, and Work’ project. It was based on interviews with students, parents, teachers and school principals that were conducted in the late 1970s. The main focus was the social relations arising from the way that secondary schooling occurred in Australia. Two cities, Adelaide and Sydney, provided the schools and interviewees selected for the study.

In terms of educational policy history in Australia, the book may be seen as a culmination of the arguments around educational opportunity and social justice through schooling that occurred in the 1960s and 1970s. These were important issues for the early Schools Commission for example. At the same time the education policies of Australian governments had already begun to turn in a different direction by the time the book was published. This is commented on in the final chapter of the book. 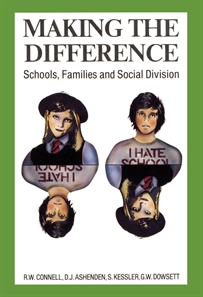 The argument developed a critique of social reproduction theory [see Glossary] that had been influential in the 1970s. The authors were concerned to show how social classes, families and schools contributed to continuing patterns of inequality in education over time. Schools for ruling class families operated differently from those for working class families. Involved in the argument was a consideration of the ways that school curricula helped deliver social inequality. The hegemonic or dominant curriculum, also described as the competitive academic curriculum, was argued to systematically discriminate against working class children. Important for the argument were sex and gender as issues that complicated social class analysis. The book was a contribution to a growing set of works from the New Left, including Marxism, on social class and schooling. The final chapter developed ideas for strategic action towards more democratic and equal schooling, so the book existed not only as a sociological study, but a practical argument for change.

Making the difference pioneered interview-based research into the social experience of education. Some have thought of the approach as ethno-methodological, but this was not the case. There was no extended participant-observation activity associated with the project. The interviews focussed first on young people, teenagers, following with the interviewing of parents, teachers and friends (these were referred to as interviewee ‘clusters’). There were 424 interviews conducted. The selection of interviewees was not random, but designed to illuminate the social class and school relationships under investigation. The research team, in the first instance, approached the principals of eight ‘Independent’ and six government schools. With cooperation from twelve of the schools approached, letters then went home to families seeking participation in the project. There were questionnaires filled out by students as well as interviews conducted. The final two paragraphs of the book express both discomforts and hopes to do with interactions between professional researcher activity and families as ‘objects’ of research interest.

The book was written for more than an academic audience. Its writing style was popular in character, ‘kids’ for example, rather than ‘young people’ were discussed, and the attempt was made to write knowledgably about contemporary youth culture.

This was generally favourable, but there were critiques from the radical left as well as right. Doug White from the Arena magazine argued that the book had not escaped reproduction theory. From the right, Alan Barcan argued that  the majority of schools and youth between working and ruling class were not discussed, and its portrayal of curriculum was flawed. Jane Kenway was not convinced by the call to action. Some years later Lyn Yates (2002) argued that the significance of the work was not simply its argument and its status as ‘a ‘classic’ point of reference. It was also an event, an intervention in ways of doing research and speaking to practice, a methodology, a textual style. In some respects its influence on the latter dimensions has been even more pervasive and long-lasting than its influence as argument or theory’.

Madeleine Arnot (2002) argued that the book:

was a timely and much needed intervention in bringing back into focus the realities of the lived experience of young people, and providing sophisticated theorizing around class and gender relations within and between the family and the school. Social class and gender relations, Connell et al. argued, could be found within the dynamics of family, school, and industrial life simultaneously. Twenty years later, we are reaping the benefits of their analysis in terms of understanding the hegemonizing influences of the school—the many subtle and indirect ways that schools produce (rather than reproduce) class and gendered identities, at the same time recognising the increasing dissonance of gender values within class formations.

By 2014, the publisher of Making the Difference estimated that over 100,000 copies had been sold. It remained in print, and was re-published as an e-book. In 2004 the Australian Sociology Association (TASA) published the results of a survey of its members concerning the most influential sociological publications in Australia from 1963. Making the Difference came in as the sixth most influential.

Social science researcher/writers in the education field have often engaged explicitly or implicitly with the book’s argument and/or methodology since its publication. Examples are two works that incorporate ‘making’ and ‘difference’ into their titles: Pat Thomson’s Schooling the rustbelt kid: Making the difference in changing times (2002), and Debra Hayes et al., Teachers and schooling making a difference (2005).

Raewyn Connell from the 1982 study continued her engagement with issues surrounding schooling and social justice. From the research that produced the original book came the single authored Teachers work (1985). It had a profound impact on the study of teachers in Australia. Further studies illuminated issues around gender, especially masculinity, and boys in schools, as well as studies on neoliberal influenced education policy, and changing patterns of working class family engagements with schooling.

In 2002 the journal Discourse devoted a special issue to reviewing the influence of the book since its publication. In the article reporting the TASA survey (2004), the argument was made that work by Raewyn Connell had very strongly influenced the frames of reference and research methodologies of educational and other sociologists over a significant period of time.

Social reproduction theory: The argument that social structures organise the transference of wealth and power, poverty and powerlessness, from one generation to the next. The sociology of Pierre Bourdieu is often seen as central in this school of thinking. Reproduction theory was often criticised as underestimating the agency of individuals and groups in the making of their own lives.