Edited by Kenneth Cunningham, the first director of the Australian Council for Educational Research (ACER), this volume collected papers given during the travelling conference of the New Education Fellowship through 1937.

Education for Complete Living was likely the most influential of any nongovernment publication about education and schooling in Australia in the first half of the twentieth century. The conference and publication occurred but a year or two before the beginning of the second world war. The conference was well aware of the coming conflagration. Laurin Zilliacus, the writer of the first chapter in Education for Complete Living titled it “The race between education and catastrophe”. He argued that the practical training of children and youth in democratic citizenship was a necessary part of the resistance to fascism and Nazism. 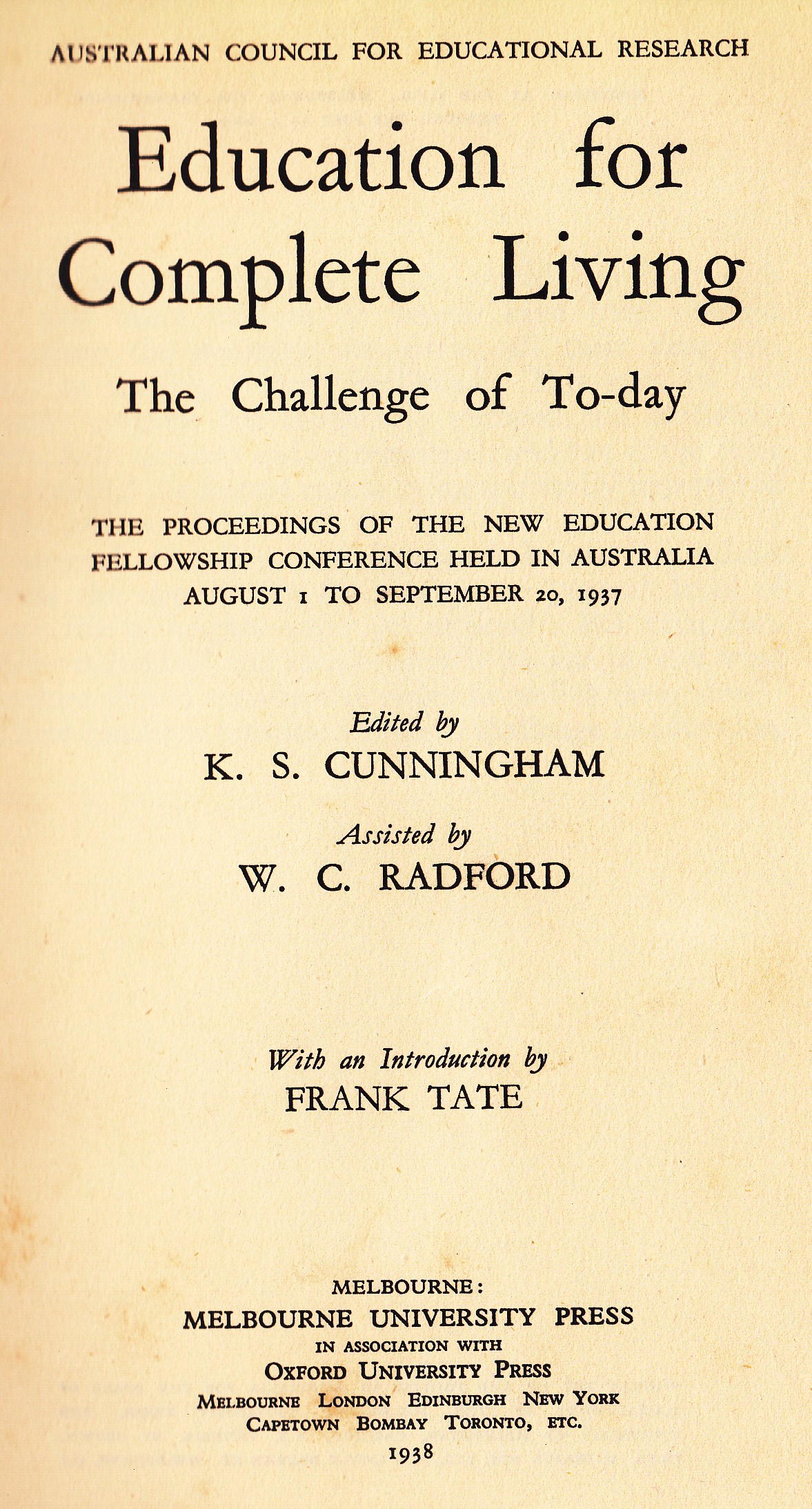 Despite the threat to world peace, the conference represented a further push for the progressive educational ideas that had become influential in Australia from the 1890s. It made sense that one of their main Australian proponents in the 1900-1920 period, Frank Tate, former Director of Education in Victoria, should introduce the volume of papers arising from the conference. However he took a defensive tone. Too many of the visiting speakers, educational experts, had been shocked by the centralisation and bureaucratic control over public education that occurred in the Australian states. Many were dismayed by the dominance of public examinations and the control by universities over school syllabuses, the weak links of schools to their parental communities, and the general  lack of freedom of teachers and schools to develop and experiment with curricula.

The New Education Fellowship (NEF) had been founded after the Great War in England, but soon developed local sections in many countries, including Australia and New Zealand. Beatrice Ensor, who came with the conference to Australia, was the NEF founder. Her and the NEF’s theosophical roots lent an idealist cast to NEF, but its education reform politics and activities developed well beyond these. By the 1930s it was the major international organisation that promoted the New Education. There were different approaches to educational reform contained within the publications and meetings of the NEF, and these may be also be seen in Education for Complete Living. Isaac Kandel for example, Professor of Education (Teachers College, Columbia University) was wary of the more radical speakers. Nevertheless, NEF members were usually agreed that progressive education could play a crucial role in the making of a better society.

Education for Complete Living, published the year after the travelling conference, was restricted in its immediate effects as war did indeed occur in 1939. Nevertheless it became a significant document for post-war educational reconstruction. Men involved in its genesis, including Cunningham, William Radford and Harold Wyndham, became key players in post-war educational reconstruction.

The program was ambitious, beginning in Brisbane in early August, and concluding in Perth in mid September.

Federal and state governments assisted with funding the project, with additional assistance from the Carnegie Corporation of New York (the original sponsor of the ACER), The Headmasters’ Conference of Australia (nongovernment schools) and a New Zealand conference committee. Many of the speakers had contributed to the NEF conference in New Zealand before they arrived in Australia.

The conference was a major event in each of the cities that it visited. Daily newspapers reported the proceedings. In some cities schools were closed allowing teachers to attend sessions. Teacher unions took notice, as did school and school system leaders. Those who attended sessions numbered in the thousands by the close of the conference in Perth. The editor of Education for Complete Living estimated that over the two months of conference, 21 speakers between them delivered over three hundred addresses, often in overcrowded lecture theatres and halls. The conference was big news in education, and the communities beyond.

Main speakers and contents of the publication 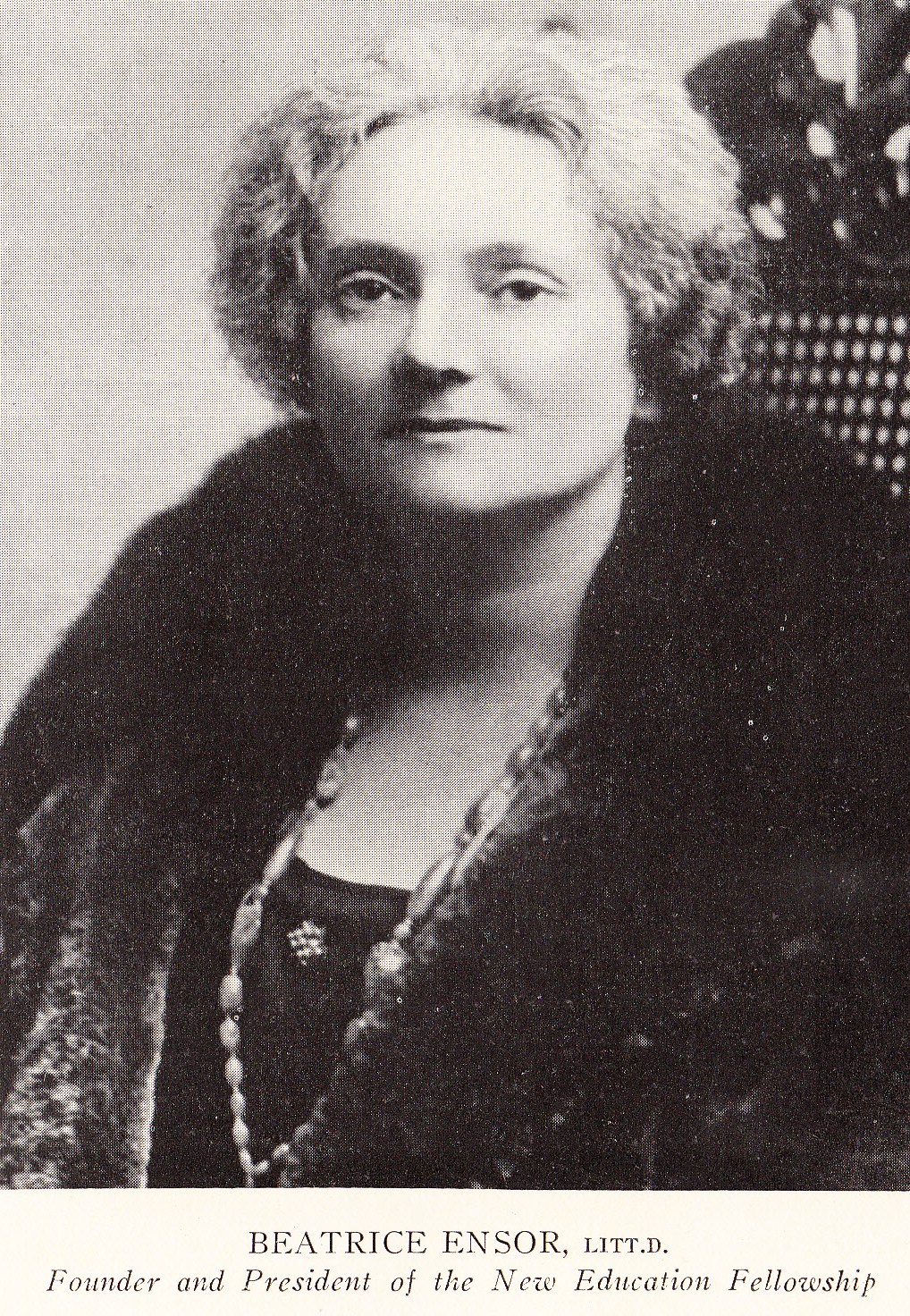 Beatrice Ensor, President of the NEF and conference speaker

Education for Complete Living is divided into 12 sections:

Other than the first section, that with the most papers (8) was no. 11. This included papers by some of the ‘stars’ of the conference, three by Susan Isaacs (London), two by Edward Malherbe (Pretoria), and one each by Harold Rugg (New York) and Beatrice Ensor (London).

Many of the speakers were internationally known, and some, such as Susan Isaacs and Cyril Norwood only became more significant over time, the first for her contribution to the child development field, and the second for an influential report leading to a reorganisation of post-war English schools.

The contribution to educational reform

The topics covered in Education for Complete Living are too many to list here. Nevertheless examples of the ways that its essays contributed to reforming primary and secondary education follow. The list is adapted from Campbell & Sherington (2006/2013, pp. 34-35). Not all of the conference speakers would have subscribed to the full list, but as a set of future ideals and aims, they had their effect on Australian school reform especially from the 1940s to the 1970s. 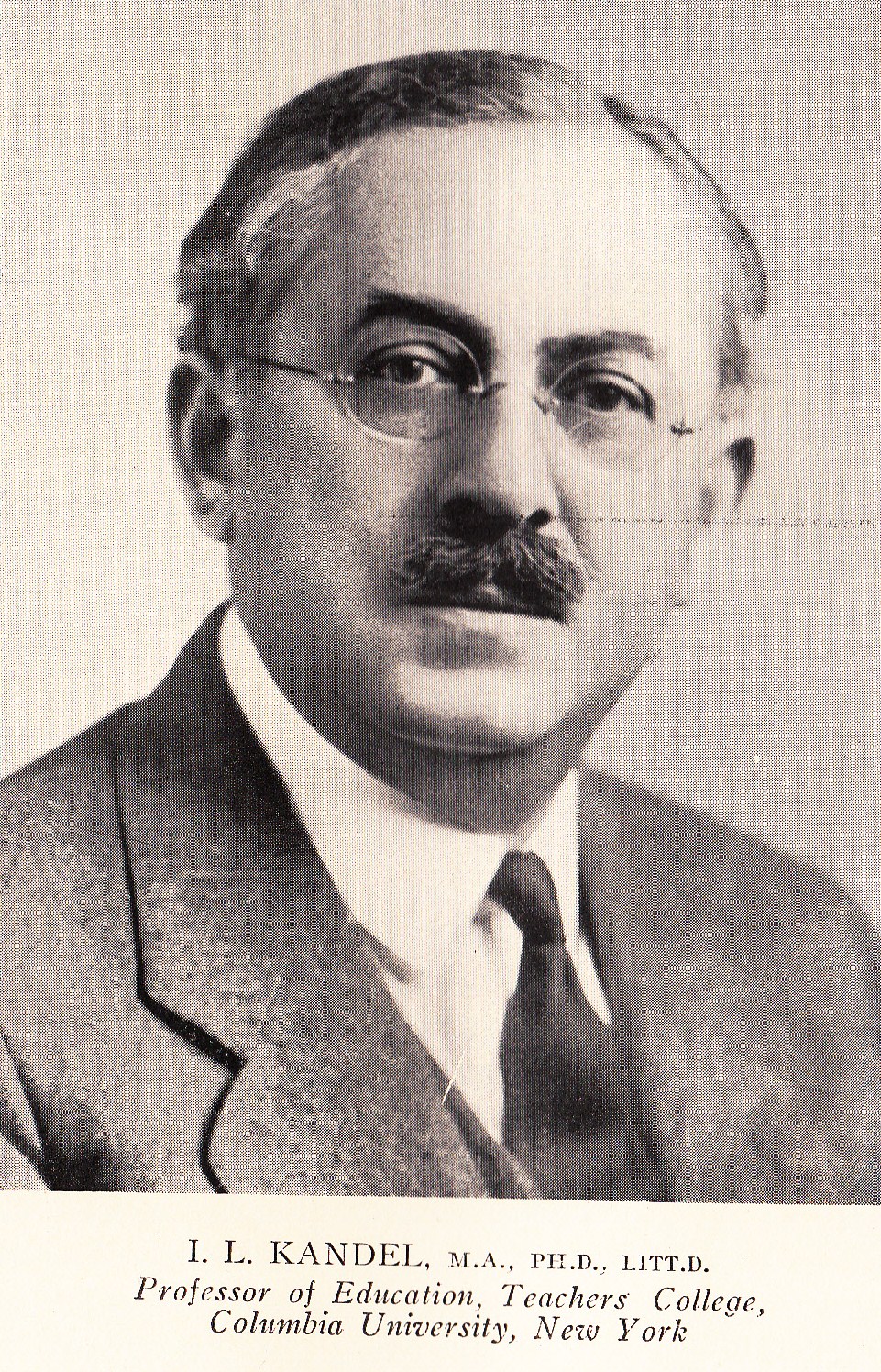 There were some problems embedded within the progressive program outlined by Education for Complete Living. Teachers and educators were imagined almost solely as disinterested professionals, thereby underestimating many of the social, cultural and personal factors that led teachers to work as they did. Social class, gender and race were barely visible as issues that might profoundly affect educational practice and reform. There was little discussion of the capacity of school sector structure and hierarchies to affect reform. The differences between public, corporate and private schools barely entered the discussion. The papers, for all their democratic and community-building orientations, remained very much about educational experts prescribing reforms without much sensitivity to the problems that may arise from such a process. 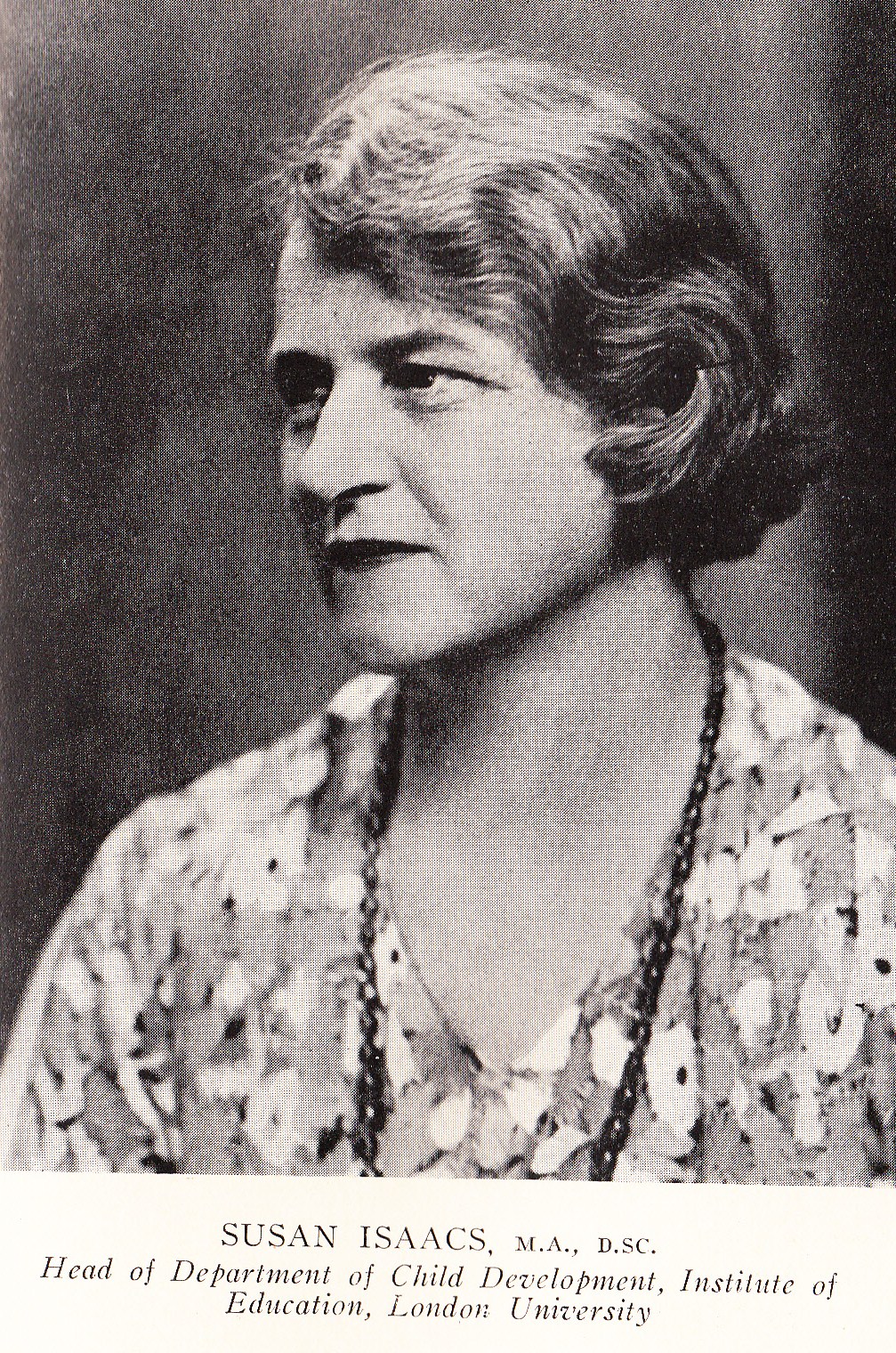 This book was not the only influence on educational reform in the 1920s to 1960s period. Criticisms of centralisation, the inflexible administration of public education, public examinations and narrow approaches to curricula and pedagogy existed elsewhere. Nevertheless the book was a major contribution to reform. The endorsement of the exercise by state education departments as well as reformers of various enthusiasms added to its legitimacy and influence. Isaac Kandel remained in Australia for a period after the conference, producing a further assessment of problems in Australian and New Zealand education. These were publications in 1938 (see references below).

The influence of the conference and publication on the Minister of Education, David Drummond, in New South Wales is documented by Godfrey (2004). Harold Wyndham, the Director-General of Education who led substantial reform of public education, also in New South Wales in the 1950s and 1960s was a significant organiser of the conference in Sydney. The editor of Education for Complete Living, and his assistant, Kenneth Cunningham and William Radford respectively, remained influential figures in educational administration and reform for many years through the ACER. It was Radford’s report to the Queensland government in 1970 that led to the end of public examinations in that state. (They survived in all others.) The NEF itself, its branches and ad hoc committees established after the conference continued to press for reform into and after the 1940s. A major aim of the conference and publication was to interest, involve and mobilise the Australian public in matters of educational reform. There is evidence of fair success in this aim.

The author thanks Dr John Hughes for his assistance in the preparation of this entry.